This time not a carded grail, but also quite rare. This is a rare vintage STAR WARS Return of the Jedi speeder bike childs pedal car which was only available as the top prize in sweepstakes competitions in the US through stores such as KMart who kept it as an instore promotion upon the general release of ROTJ. These pedal cars were displayed in the stores on their own purpose built cardboard units which also held the entry forms. Kenner sub-contracted the making of these units to Huffy who were well known for their pedal car building who made only a very limited amount (approx. 200-300) so as to keep it a special prize. 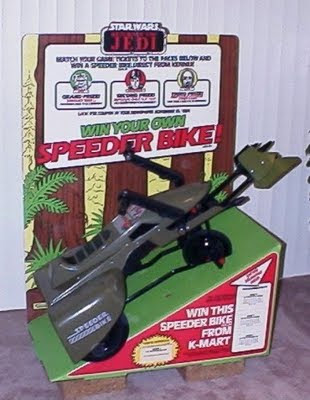